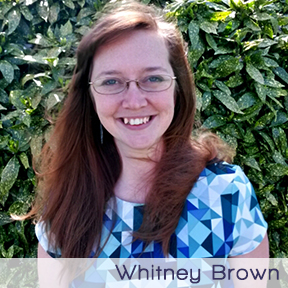 Whitney Brown is an artist-theologian, freelance writer, and educator who is always seeking adventure. Whether through work, volunteer opportunities, or just to support friends, Whitney has traveled throughout the Eastern United States exploring many avenues of ministry-in-action. Now settled in Memphis, she seeks to lead and serve through the arts in multiple venues. Whitney’s ministry has been most impacted by the movement of God in her own life through the love of family and friends along with the simultaneous brokenness of creation. While poverty, addiction, racism, and fear seem to abound at every turn in our world, Whitney’s goals in ministry are to make this world more like the Kingdom, beginning with her own heart and vision. Whitney received a B.A. in Religion from Maryville College and an M.A. in Religion from Memphis Theological Seminary.