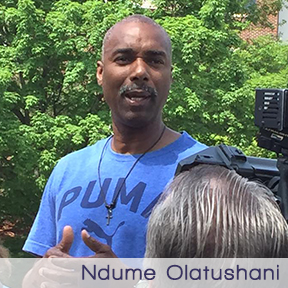 Ndume Olatushani
Ndume Olatushani was wrongly convicted for first degree murder in 1985 and spent twenty-eight years in maximum security prison, twenty of those years were spent on death row. Ndume is the seventh of eleven children from St. Louis Missouri. His life’s story is one of human resilience.

Storytelling as Activism Against the Machine of Death
Stories are central to good activism. This presentation weaves together stories about activism, the death penalty, and mass incarceration as Nikki Roberts and Melissa Browning reflect on the social justice community that was created through Kelly Gissendaner’s death row clemency campaign. Nikki Roberts is a returning citizen who spent 10 years incarcerated. During this time, she tried to take her own life, but Kelly spoke through the vent and stopped her. Melissa Browning is a seminary professor and social ethicist became an organizer on the campaign because of Kelly’s story. In telling their stories together, they offer reflections on how stories can create social change.

Stories from the Cradle to Prison Pipeline
Nationally, 1 in 3 Black and 1 in 6 Latino boys born in 2001 are at risk of imprisonment during their lifetime. While boys are five times as likely to be incarcerated as girls, there also are a significant number of girls in the juvenile justice system. This rate of incarceration is
endangering children at younger and younger ages. Do you know their stories? This is America’s pipeline to prison — a trajectory that leads to marginalized lives, imprisonment and often premature death. Although the majority of fourth graders cannot read at grade level, states spend about three times as much money per prisoner as per public school pupil. CDF’s vision with its Cradle to Prison Pipeline campaign is to reduce detention and incarceration by increasing preventive supports and services children need, such as access to quality early childhood development and education services and accessible, comprehensive health and mental health coverage. Emphasis must be shifted for the sake of our children and our nation’s future.
This workshop will open your eyes to the stories of children and adults who have been caught up in the cradle to prison pipeline and how you can be involved in real change.