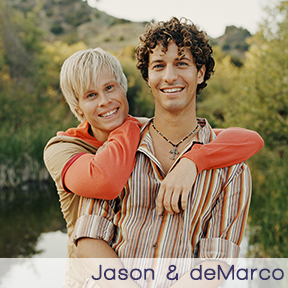 Jason & deMarco
Jason & deMarco are celebrating 14 years together this summer. They were married in 2010 and in 2011 welcomed twin sons through surrogacy, each a biological child with the same biological mother, documented in Jason’s recently released book, “The Journey of Same-Sex Surrogacy.” Jason & deMarco announced the launch of their non-profit, (S.A.F.E.) Safe, Affirming, Family Environment in 2011. With the international release of their album in 2006, “Till the End of Time”, Jason & deMarco became familiar names to music fans around the world. Their first single “Trying to Get to You” climbed the Billboard Charts and their second single, “This is Love” won “Music Video of the Year 2006” on MTV’s LOGO. They are touring one weekend per month in the US, primarily visiting affirming congregations sharing their story in concert while also raising awareness and funds for SAFE.