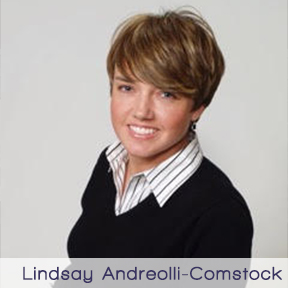 Rev. Dr. Lindsay Andreolli-Comstock currently serves as the Chief Strategy Officer with Convergence US. Prior to joining the Convergence team, Lindsay initiated, negotiated and implemented a unique merger between The Beatitudes Society (for whom she was Executive Director) and Auburn Theological Seminary in New York City. She is an ordained Baptist minister who has served congregations in Virginia and Massachusetts, four years as an Advocate for Women and Children focusing on anti-human trafficking education and child sex tourism prevention in Southeast Asia and is the former Executive Director of National Farm Worker Ministry.

Andreolli-Comstock worked alongside indigenous leaders in Southeast Asia to conduct anti-trafficking campaigns in rural villages in Indonesia as well as developed and distributed child sex tourism prevention kits in Indonesia, Cambodia and Malaysia. During her time on the Board of Directors with the Alliance of Baptists, she served as Chair for the Ministry Partners Committee, was a member of the Justice for Israel and Palestine Committee and helped craft the Alliance’s statement in response to the death of Trayvon Martin.

Andreolli-Comstock is an accomplished speaker, consultant and preacher. She holds a BA in Religion from Chowan University, an M.Div from Baptist Theological Seminary at Richmond, and a D.Min from Louisville Presbyterian Theological Seminary. Her dissertation, “”More Than Charity: Educating and Equipping Lay Leadership for Social Justice Advocacy and Action””, can be purchased at the Theological Research Exchange.

Andreolli-Comstock speaks fluent Bahasa Indonesia, the national language of The Republic of Indonesia. She and her wife, Mary, reside in Atlanta, Georgia with their dog, Amber.