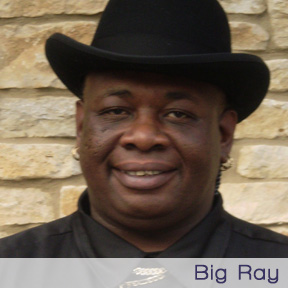 Big Ray and Chicago’s Most Wanted

Big Ray grew up in the South Side of Chicago and began his music career as a singing bartender, singing along with bands like Billy Branch and the Sons of Blues, Jody Christian, Willie Kent and the Gents, and J.W. Williams. As a solid drummer and dynamic singer, Ray was soon in nonstop demand. In 1995, Ray was asked to join the legendary Otis Rush blues band. They toured in Japan, Europe, and across the U.S. Currently, Big Ray tours with Jimmy Johnson, and also plays with his own band, Big Ray and Chicago’s Most Wanted. They’ve got a steady gig at one of Chicago’s oldest and most respected blues clubs, B.L.U.E.S on Halstead. Chicago’s Most Wanted is a band of world renowned musicians, and together they form the best of what Chicago has to offer.