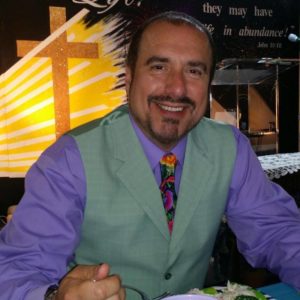 One year before the Little Rock Nine bravely endured threats of violence and death to integrate Central High School, Randy Eddy-McCain was born in Arkansas. He grew up in a conservative Assemblies of God church where he fell in love with Jesus as a little boy.

As Randy got older, he felt called by God to go into the ministry, but he had what religion taught him was a problem. He was attracted to men, not women. He hoped he might grow out of it. He prayed he’d grow out of it, but when that didn’t happen, he explored what it meant to be gay.

Without an example of how a gay man could be a Christian, Randy moved back and forth between what seemed like two conflicting worlds. As a Christian, he tried not to be gay, and as a gay man, he tried to ignore how much he still loved Jesus and wanted to minister to people in need.

Turmoil turned to peace when Randy was able to embrace both his faith and his sexuality. He committed his life to the love of his life, Gary Eddy and founded Open Door Community Church in Little Rock, Arkansas.