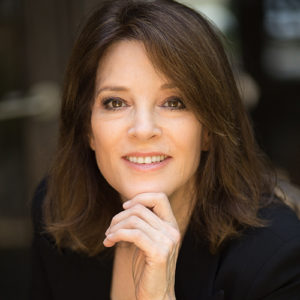 Marianne Williamson is a bestselling author, lecturer and non-profit activist. She has worked
with thousands of individuals, as well as large and small groups, in transforming crisis into
opportunity. For 35 years she has been helping people heal from problems that in many ways
have been created by an irresponsible political establishment. She has an up close and
personal understanding of the impact of bad policy on average American’s lives.
For three decades Marianne has been a leader in spiritual and religiously progressive circles.
Her book about the intersection of spirituality and politics, Healing the Soul of America, was
released in 1997 and re-released in a revised edition earlier this year. Her book A POLITICS
OF LOVE: Handbook for a New American Revolution, was released in April 2019. In total she
has written 13 books, four reaching # 1 on the New York Times Best Sellers List.
Marianne has founded nonprofit organizations such as Project Angel Food, that in 1989 started
delivering meals to homebound AIDS patients. The organization has now served over 11 million
meals. She has also worked throughout her career on poverty, anti-hunger and racial
reconciliation issues. She has advocated for reparations for slavery since the 1990’s and was
the first candidate in this presidential primary season to make it a pillar of her campaign. In
2004, she co-founded The Peace Alliance and supports the creation of a US Department of
Peace. In addition, she advocates a cabinet level Department of Children and Youth to more
adequately address the chronic trauma of millions of American children.
Facebook
Website
Project Angel Food
The Peace Alliance