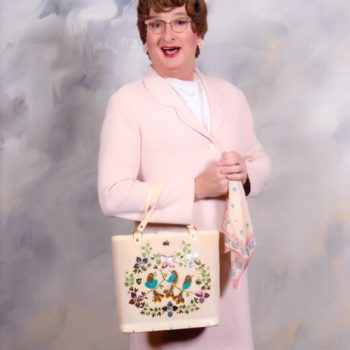 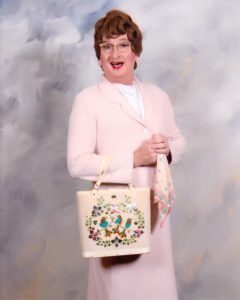 In 1988, Paul J. was working for a singing telegram company in Dallas. During his tenure there, Dana Carvey introduced his character, “Church Lady”, on SATURDAY NIGHT LIVE. The owners of the company asked Paul if he could imitate that character so that “she” could be sent out as an option for singing telegrams. Paul was very successful at perfecting Dana’s character for about two years.

A chance meeting with Dana Carvey made Paul realize that Dana held a copyright on “Church Lady” and Paul didn’t want to do anything to profit off of someone else’s creation. In 1990, Paul’s version of this character began a metamorphosis which eventually became his own character, Sister Helen Holy. Clearly INSPIRED by Dana Carvey, Sister Helen is pure Paul J. Williams. Taking on the sensibility of Paul J. Williams’ Southern Baptist upbringing, Sister Helen also benefits from Paul J. Williams’ uncanny improvisational skills. Frequently misconstrued as a Catholic nun, due to the “Sister” title, Helen is quick to point out her Baptist faith as being the only true religion anyway.