By Rick Meredith May 5, 2017 Goose News
No Comments

The 2017 Wild Goose music lineup is fresh, hopeful, and more fun than you can handle! It might just be the most eclectic, diverse, dance-worthy, celebration style mashup in Goose history! 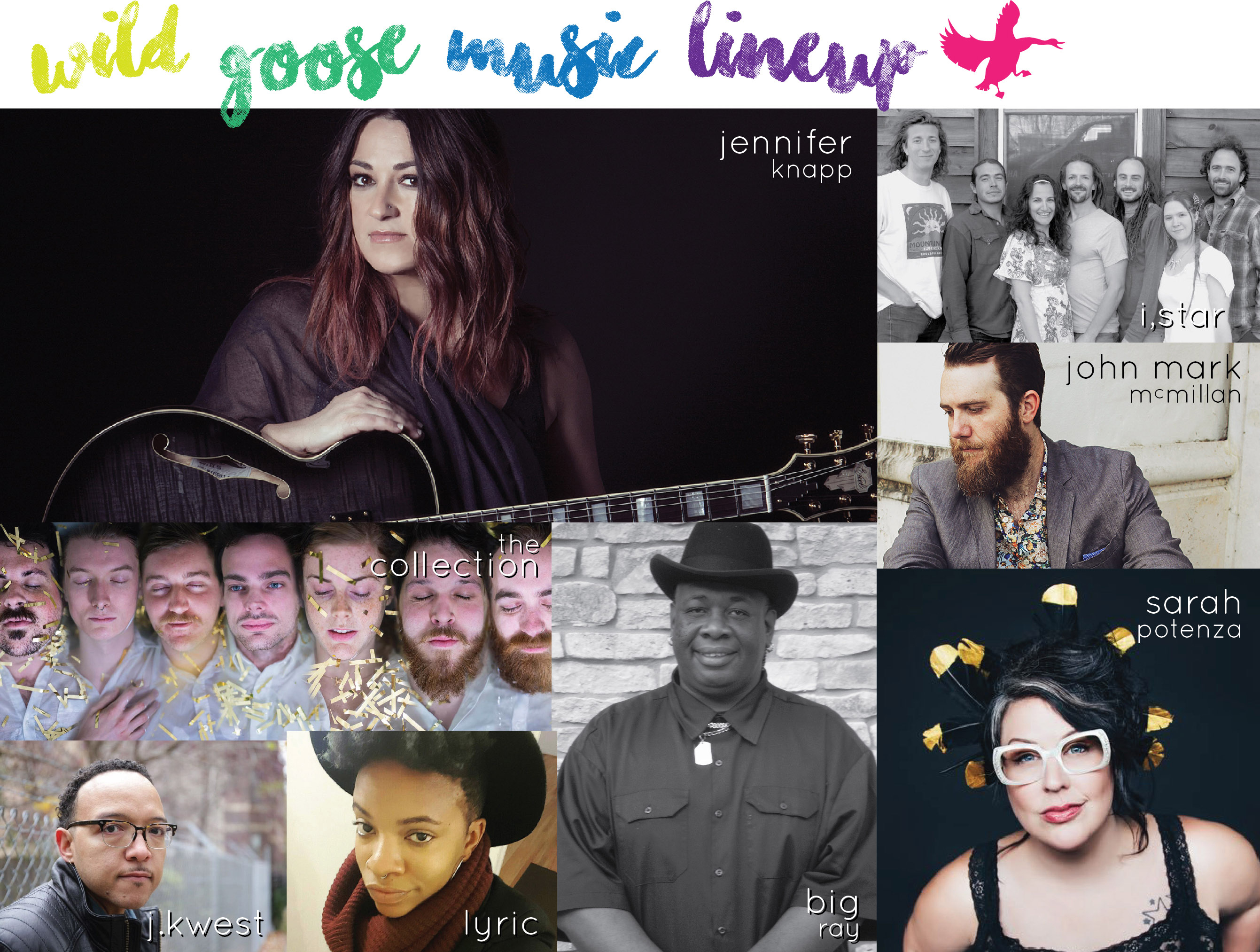 The 2017 Wild Goose music lineup is fresh, hopeful, and more fun than you can handle! It might just be the most eclectic, diverse, dance-worthy, celebration style mashup in Goose history!

Only at the Goose can you hear “The Voice” favorite Sarah Potenza’s blistering, get-on-your-feet rock, hip-hop artist J.Kwest’s eloquent calls for justice The Collection,’s soulful lyrics and folk-inspired melodies, welcome back Goose favorite the amazing Jennifer Knapp, lose yourself in the high energy of John Mark McMillan, and dance to Big Ray and Chicago’s Most Wanted and more and more, including folk legend Tret Fure, Melissa Greene, iStar, Namoli Brennet, Lyric – and a gospel choir from the gospel choir capital of the world, Chicago, IL – all in one amazing weekend?

And more and more – yes, we’ve already said “and more and more” but with the addition of a new “side stage” at “Main Stage” we have more than 30 musical experiences on the schedule this year.

Music unites us. It inspires our courage and our spirit to keep working for justice and peace. Martin Luther King, Jr., Pete Seeger, Joan Baez, Bob Dylan and so many others understood this. They made a conscious effort to develop a soundtrack for the Civil Rights movement. And it made a difference. That’s what we’re trying to do at Wild Goose, too, help make a playlist for this movement to create a more just and generous world. By welcoming established and emerging musicians alike, together they’ll help us sing along, march along, and keep moving forward.

Music of the Goose

The Collection – Combine the orchestral ingenuity of Sufjan Stevens with the powerful vocals of Mumford & Sons and you get the best description of this Greensboro, NC based band.

Jennifer Knapp – Grammy nominated, Dove Award winning artist with a powerful voice, Knapp’s albums include Kansas, Letting Go, and Set Me Free. In addition to crafting music, she advocates for others: in 2011, Jennifer launched Inside Out Faith, an advocacy organization for LGBTQ people of faith.

J.Kwest – Lives in the space between soul music and souls period. As an artist, this Chicago native and Morehouse Man; Pastor, advocate, and EMMY Award winner has used his unique rhythm to tell stories of deep meaning inside and out of the church.

Lyric – When words fail, LYRIC sings. With an enlightened mixture of pop, soul, and FUNK; LYRIC awakens an undiscovered spirit within their audience. Described by many as the best band in Asheville, LYRIC delights crowds across the region.

Sarah Potenza – Sarah Potenza is a singer songwriter based in Nashville, Tennessee. Rolling Stone stated that “Potenza is to the Blues what Adele is to pop.” Sarah wowed judges and fans alike in Season 8 of The Voice, causing a sensation with her powerful, soulful voice. She recently released an album, Monster, and is currently touring the US.

John Mark McMillan – A singer songwriter who’s not afraid to explore difficult subjects. His songs have been described as “…an ongoing dialogue with God, ever-wrestling for some kind of blessing and usually at volumes most suited for rock clubs.” Don’t miss Mercury & Lightning, his upcoming release.

I,Star – I,Star’s performances are a dynamic interplay of hard-hitting rhymes weaving through evocative refrains, building to harmonies in the hooks. Their wholly original “folk-hop” carriage bears keen commentary on personal and global spiritual transformation, stewardship of the Earth, social justice, and visionary love.

Tret Fure – One of the most prolific artists in the contemporary singer-songwriter arena, Tret Fure has released 15 albums and CDs over the course of her 47 year career. In addition to being a gifted songwriter, Fure has engineered and produced countless recordings by a variety of artists, including her own work.

The Many – Weaving together indie-folk, pop and gospel into one unique sound somewhere between them all, The Many deliver songs for people to sing together, filled with questions, doubts, laments, and longings for justice and restoration, always with an eye out for the God who so loves the world.

Namoli Brennet – Dubbed, “Among the best folk-rock artists in the US,” songwriter Namoli Brennet has been touring with her own brand of moody and inspiring music since 2002. She’s a breathtaking and moving performer, and her sweet, road-weary voice is as quick to deliver her wit and humor as it is a turn of phrase. She’s been described as a cross between Patty Griffin, Lori McKenna and Amy Ray, and Zocalo magazine calls her music, “Gorgeous and introspective.”

Melissa Greene – Melissa Greene was a part of the Grammy Nominated and American Music Award wining Christian Music Group, Avalon, for almost 7 years. Now she serves as the associate pastor and pastor of Worship and Arts at Gracepointe Church.

Ken Medema – Kenneth Peter “Ken” Medema is an American musician and singer-songwriter who has been performing in the United States, Canada, and Europe for more than forty years. Some of his best known songs began as live improvisations.