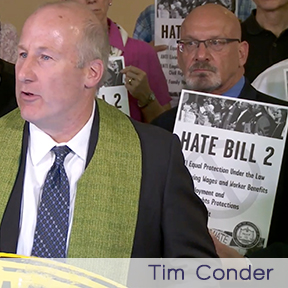 Tim Conder
Tim is the founding pastor of Emmaus Way in Durham, NC. He organizes nationally with the Industrial Areas Foundation (IAF) and locally with Durham CAN serving on their Strategy Team and as a leader of their Clergy Caucus. Currently he working with IAF on a national campaign against gun violence (Do Not Stand Idly By) and locally with CAN on policing transformation, affordable housing, living wage legislation, and educational reform in Durham. Tim is a PhD Candidate at the University of North Carolina in Cultural Studies researching as a pastoral leader/ethnographer in the NAACP “Forward Together” Moral Movement in NC. He is the author of three books including the forthcoming “Organizing the Body” (Fall 2016; Chalice Press), “Free for All: Rediscovering the Bible in Community”, and “The Church in Transition: The Journey of Existing Churches into the Emerging Culture. Tim is also a Trustee Emeritus at the Seattle School of Theology & Psychology.

Two of the greatest indictments that can be made of any faith community are critiques of superficiality in its internal relationships and missional insignificance to its local setting. And sadly, I have seen these failures realized far too often in communities with far too great a potential. This conversation applies contemporary principles of faith-based community organizing and the ancient theological logics of shalom/jubilee to the lived practice of faith communities that seek to thicken their relational lives and challenge the status quo injustices of racialized, market-obsessed empire in local communities. My contributions to this dialogue are rooted in organizing in national campaigns with the Industrial Areas Foundation (IAF), local leadership with Durham Congregations, Associations, & Neighborhoods (Durham CAN), planting/pastoring a community shaped by organizing practices, and as pastoral leader/theological ethnographer in the NAACP’s “Forward Together” Moral Movement in NC.