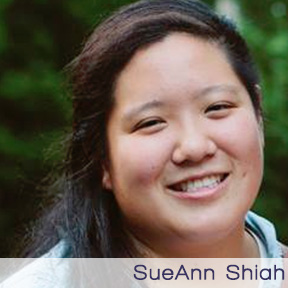 SueAnn Shiah
SueAnn Shiah is a Taiwanese American multidisciplinary artist working predominantly through the mediums of word, music, and film. Themes in her work explore spirituality, identity, race, gender, and sexuality. In addition to her own creative works, she also works in the business side with her management company and label Scorched Rice Records. She enjoys swimming, cycling, cooking, and creating safe and creative spaces to explore cross cultural tensions, spirituality, and relational significance. She has a B.B.A. in Music Business with a Production emphasis and a Chinese minor from Belmont University.

HuanDao- The Journey of Asian American Identity Through Personal Narrative
When faced with the reality of persistent erasure of Asian American narratives, SueAnn Shiah was convicted to document her 500+ mile bicycle trip of the island of Taiwan. Along the journey and through the filmmaking process, she was confronted by the realities of a family and cultural history riddled with war, colonialism, and diaspora. These, combined with the ever present tensions of bicultural identity, ask questions not only of what it means to be Taiwanese but what it means to be American? Filmmaker SueAnn Shiah will be joined by Kenji Kuramitsu and Soong-Chan Rah in discussing the film, its intersection with their own stories, and what is “Asian American” identity.