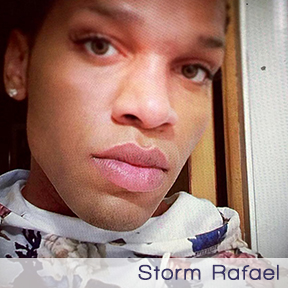 Storm Rafael
Storm “Rafael” meaning “God has healed”—is truly a “storm” that God has healed from a deeply painful and conflicted past. From 2009-2015 Storm worked in full-time ministry, during which he traveled internationally, immersing himself in missionary efforts. Much of Storm’s life was spent within largely Black congregations, where he observed the profound stigmatization of Black, gay, men and unearthed his passion to contend for justice for the Black gay community. Additionally, Storm is a journalist for the West Virginia Community Development Hub, blogger for The Political Pages blog, and a twice published author. As Storm seeks to bring healing to the broken lives of those in the gay community, he employs prophecy and dream interpretation into heart-felt one-on-one life coaching sessions. Currently, Storm Rafael attends West Virginia State University, where he is pursuing a double major in Sociology and Political Science, with a minor concentration in Public Relations.

Black, Gay, & Gifted
Black, Gay, & Gifted is a brutally honest discussion about homosexuality within the Black community. It is the intersection where faith, sexuality, and social mores meet! Black, Gay, & Gifted employs transparent testimonies from the life of a Black, gay, Christian man, life coaching to rebuild broken lives, candid interviews, food for the soul, all culminating with moments of prophetic enlightenment.