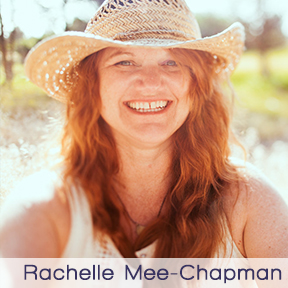 Rachelle Mee-Chapman
After a lifetime in the church, earning a Master’s degree in Theology, becoming ordained in a denomination that had no history of ordaining women, and serving for 15 years in her home congregation, Rachelle Mee-Chapman said goodbye to church. In the years following, she settled upon a hybrid approach to ministry, combining spiritual direction and life coaching, establishing the online soulcare community, Flock, and teaching at progressive Christian gatherings and in her own workshops. Rachelle is a contributing editor at BlogHer for Spirituality and Religion, a guest lecturer at several Seattle area colleges and seminaries, and creator and host of Relig-ish, a video series on YouTube. She is the author of the new book Relig-ish: Soulful Living in a Spiritual-But-Not-Religious World (2016, Chalice Press).

Relig-ish: Soulful Living in a Spiritual-But-Not-Religious World
When it comes to religion, “choose one” is no longer your only option. The spiritual-but-not-religious are not adrift — they actually have some of the most robust faith practices. Creating your own eclectic spiritual practices is not the sign that you are a faith-less person but rather a faith-ful person responding to an increasingly expanding world. Becoming relig-ish will help you live your values out in everyday ways far more effectively than spending all your Sundays at church.