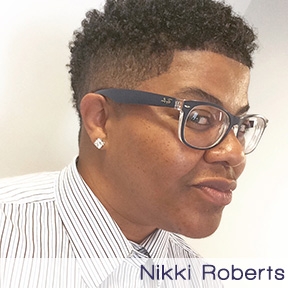 Nikki Roberts
Nikki Roberts is an author, public speaker, activist, and returning citizen, who’s studied both Mass Communications and Theology on collegiate levels. Nikki served 10 years without parole in Georgia’s Department of Corrections from 2004 – 2014 and frequently uses her lived experiences as well as systemic research to raise awareness on the myriad of issues associated with Mass Incarceration. Nikki is also under book-contract with Fortress Press working on her soon-to-be released memoir “Freed From Within”.

Storytelling as Activism Against the Machine of Death
Stories are key to good activism. In this presentation, we are weaving together intersecting stories about activism, the death penalty, and mass incarceration, both from our own experiences and from our shared work on Kelly Gissendaner’s death row clemency campaign. Nikki Roberts is a returning citizen who spent 10 years incarcerated. During this time, she tried to take her own life, but Kelly spoke through the vent and stopped her. After she was released, Nikki joined the campaign to save Kelly’s life. Melissa Browning, a seminary professor, social ethicist, and one of the organizers on the campaign joins Nikki to talk about social activism and the community that was created through telling Kelly’s story.