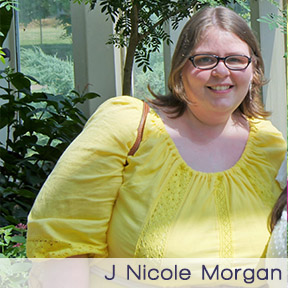 J Nicole Morgan
J. Nicole Morgan is a fat Christian whose work centers on the intersection of faith, fatness, body image, and community. She is passionate about honoring the “image of God” in each and every body. Her work and writing on fatness and faith has been featured in Christianity Today’s Her.meneutics and on Moody Radio’s “Up for Debate.” Nicole has a Master of Theological studies from Eastern University’s Palmer Seminary where she served as a Sider Scholar with Evangelicals for Social Action. Nicole lives near Atlanta, GA and enjoys spending her free time hunting thrift stores for vintage sheets to up-cycle into clothing, honing her “cool aunt” skills, and finding new recipes to try for the next church potluck. You can find more from Nicole on fat bodies and faith at facebook.com/Fatness.Faith/, and on twitter @jnicolemorgan.

Embodied Stories: Fat Bodies and The Body of Christ

J. Nicole Morgan will lead an interactive talk that reshapes the stories we are told about fat bodies into stories that fat bodies tell. Conventional wisdom says fat bodies need to be conquered. However, the bodies of countless fat people tell a different story, one that has no profit for the industry that banks on our ever-increasing desire to reshape our bodies into an ideal. The Christian church frequently adds spiritual weight to the demand to be thin. Despite a culture that says we can’t, it is possible to live a vibrant, embodied life in a fat body.