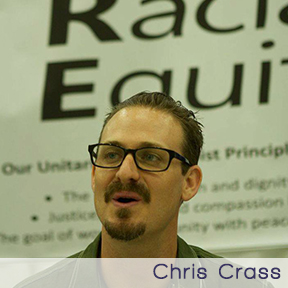 Chris Crass
Chris is the author of the new book Towards the “Other America”: Anti-Racist Resources for White People Taking Action for Black Lives Matter. He writes and speaks widely on anti-racist organizing, feminism for men, strategies to build visionary movements, and creating healthy culture and leadership for progressive activism. He was a founder of the anti-racist movement building center, the Catalyst Project, and helped launch the national white anti-racist network, SURJ (Showing Up For Racial Justice). Rooted in his Unitarian Universalist faith he works with congregations, divinity schools, and religious leaders to build up the spiritual Left. He is also the author of Towards Collective Liberation: anti-racist organizing, feminist praxis, and movement building strategy. He lives in Nashville, TN with his partner and their two sons.

Courage for Black Lives Matter, Courage for Racial Justice
Join us for an interactive talk with social justice movement author and educator Chris Crass on developing a culture of courage for racial justice in white and majority white faith communities. How can we inspire white people to join racial justice efforts in these times? How can more and more of us, who are white, step up to both support the Black-led grassroots movement and also bring racial justice leadership into our communities and places of worship? Chris Crass gives talks and sermons and leads workshops around the country with the goal of supporting and building up grassroots people’s movements. He believes we need to work from a place of love, guided by a vision and practice of collective liberation and that while we work against supremacy systems and the culture of death they create, we also build up beloved community and resurrect our shared humanity.