Pastor Tom Gaulke, with members of First Lutheran Church of the Trinity, Chicago, tell the story of the congregation’s journey into growth and works of liberative justice: from winning a local bus to helping to close down two dirty coal plants, to raising the Cook County minimum wage, to co-founding Moral Mondays IL, this small congregation, working in coalition and community, makes a huge impact on the Southside of Chicago—with a particular eschatology and view of that which God calls us to engage—and they hope all church communities will do the same. Hear about that vision, and how one community lives into it (flaws and all). Plus, pick up some useful tools for engaging your community back home! 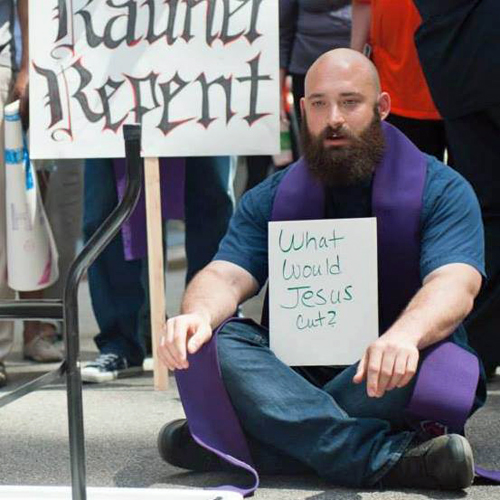 Tom Gaulke is pastor at First Lutheran Church of the Trinity in the Bridgeport Neighborhood of Chicago whose community-crafted Call to Mission is “We are faith community called to grow in the Spirit, love as Christ loves us, and participate in God’s liberating work of justice and peace.” Tom cofounded Bridgeport Alliance, an organization that, in coalition, shut down two dirty coal-fired power plants on Chicago’s Southside. More recently they won a battle for a 31st Street Bus! Tom is a leader in Moral Mondays IL and Resist Trump Tuesdays, and co-chair of the Faith Liberation Table of the People’s Lobby. He loves direct actions and Civil Disobedience. He loves bringing the crises we feel each day to the doorsteps of the powerful who would choose to ignore them—with our demands. He believes community is sacred. Tom also loves scootering. He has scooted to Wild Goose from Chicago three times. And he is very proud of that fact. He has an incredible spouse named Daisy. And a spunky pup named Samson.
www.FirstTrinityChicago.com